The third certainty in life

A wise man once said that there are two certainties in life: death and taxes. I beg to differ. There are, in fact, three certainties in life: death, taxes and Frankel. After last Wednesday at York, when he ran over a mile and a quarter for the first time (and won easily), it made me realise that we really do not know just how good he really is, because no other horse has seriously tested him. And my appetite is whetted for the Arc de Triomphe at Longchamp on the first Sunday in October. I sincerely hope that the connections decide to give it a go, rather than the "safe" option of Ascot over a mile and a quarter later in the month. One thing is sure. If Camelot wins the St Leger at Doncaster, and thus becomes the first male Triple Crown winner since 1970, and then Frankel wins the Arc, then 2012 will still be remembered as the year of Frankel.
Posted by Brendan Allen at 8:15 p.m. 2 comments:

On October 27th, we in Ireland will be going to the polling stations to elect a President.

Before anybody gets too excited, I am not really of the opinion that there is going to be a dramatic, emotional earthquake similar to Mary Robinson's election in 1990.

So far the only two candidates are Michael D Higgins of Labour, and Gay Mitchell of Fine Gael.

Two other Independent candidates have stated that they want to be on the ballot paper; they are Mary Davis, and Sean Gallagher.

So far, Davis and Gallagher have been campaigning with local councils, because they need to be nominated by four County Councils to get on the ballot paper. Some councils have already stated that they will support either Gallagher or Davis.

Today the Minister for Environment issued the official notice about the election, and the closing date for nominations is 28th September.

So next the councils have to formally meet and officially "sign off" on the nominations of either Davis or Gallagher; councils usually meet once a month anyway.

I am going here and now to make a prediction; it would not surprise me if Fine Gael, Labour, or both decided to reign in their councillors with the party whip to try to ensure that Davis and/or Gallagher DO NOT get on the ballot paper. The tactic might not succeed if they tried; e.g., Monaghan County Council has no Labour Councillors, and Fine Gael don't have a majority.

But in politics, nothing surprises me.

After election, the President has little or no real power. He/she officially can't leave the country or make a public statement without permission of the Government, and he/she must sign legislation into law, or resign. All the President can do is refer a Bill to the Supreme Court to test whether or not it is constitutional.

So far nobody has asked me to run for the Presidency; but there's a nice six-figure salary and a good pension at the end of the seven years, so never say never!
Posted by Brendan Allen at 8:57 p.m. 3 comments:

Email ThisBlogThis!Share to TwitterShare to FacebookShare to Pinterest
Labels: politics

This blog could be turning French

I think watching the Tour De France is having an effect on me!

This should put a smile on your face

What is also remarkable about this talented man is that at the age of three, he became blind through illness.

He never really learned to play the guitar himself, yet he was still capable of composing arguably the finest and best known guitar works.

While the Concierto de Aranjuez is obviously his best known work, here is something I came across earlier this year: the Concieto Andaluz.    Here is just the first movement, which is often played by Marty Whelan on Lyric FM in the morning.

I believe this is a youth orchestra from Taiwan.  There are other versions up on YouTube, but I think the sound quality is better here.

Email ThisBlogThis!Share to TwitterShare to FacebookShare to Pinterest
Labels: Sport

One: Kauto Star will win the Cheltenham Gold Cup.

I think he is a slightly better horse than Denman, but if the ground turns heavy, then I might change my mind.


Two: There will NOT be a General Election in the Republic of Ireland in 2010.

The Greens won't force one because they would probably be wiped out of the Dail; the Fianna Fail backbenchers, who are most in danger of losing their seats, will not want to force one either.


Three: David Cameron will be PM of the UK by December 31st next.

Possibly the biggest certainty of 2010. Only thing that can stop him is a Labour-planned-and-backed military coup.


Four: Unemployment in the Republic of Ireland will dip below 400,000.

An economic recovery is coming, but it will be slow.


Five: Tony McCoy will NOT win the Aintree Grand National.

I would be delighted to get this one wrong, but the fact that he is retained by JP McManus, I honestly feel, could work to his disadvantage this time. He would be required to ride JP's runner, and, with the possible exception of King John's Castle, JP really doesn't have any staying chasers with a strong chance this time.

They have so many good players, and no weak spots. The biggest dangers are Brazil.


Seven: France will not get out of the group stage.

This has happened before, and Mexico and Uruguay, I predict, will come out of that group. It also highlights the reality that the Republic of Ireland team are an ordinary side by international standards.


Eight: In the US November elections, the Republicans will make gains, but will not take control of the House of Representatives.

Only about a third of the Senate seats are up, and the Democrat lead is too big.


Nine: Ireland will win Zero medals at the Winter Olympics in Vancouver.

Come to think of it, this is a bigger certainty than Number Three above.


Ten: Kieran Fallon will ride a Group One winner trained by Aidan O'Brien.

I admit that after the French drugs suspension, just after Dylan Thomas won the Arc, I honestly did not think we would see him riding on a racecourse again. Either injury/suspension to Johnny Murtagh, or more likely the fact that Ballydoyle can sometimes run a few horses in a big race, and the possibility that Murtagh might choose the wrong one to ride, will give the Clareman the chance to fully mark his rehabilitation.

I invite everybody else to join in. Gloating over another persons lack of prediction skills is not allowed.

Just as summer is coming to an end, here is something I like from the rock-classical-fusion group, Rondo Veneziano.

A new life enters the world

My take on the business about the Pope and condoms

While all the palaver has been going on about condoms and AIDS in Africa, etc, it is time for me to give my tuppence worth.

Let me make one thing clear: I strongly believe that this whole business is not about Africa at all, but it is really about the so-called Western World.

It is about the fact that certain people want to live a certain lifestyle. Therefore, they must silence or quench anybody or anything which might get in the way. What they basically want is for the Pope to approve of a sexuality based on the principles of "IT'S ALL ABOUT ME ME ME ME ME ME ME!!!!!"

So when I hear various bleeding hearts commentating in various media about the poor people in Africa dying of AIDS, frankly I am cynical that they are really only thinking about Number One.

Here are two more takes on the issue worth reading: first here from David Quinn, and second here from John Waters, both published in Ireland's two biggest newspapers today.

Generally speaking on the subject of the development of Africa, I have long believed that quite a number of people in the Western World are, under the disguise of development, really trying to make everyone (including Africans) think that Africa is to blame for Africa's problems; such as, you are all breeding far too many children, etc. Therefore the nice middle-class people of the Western World don't necessarily have to feel guilty about their current use of the planet's resources - and therefore do not have to reduce their consumption, or change their habits or lifestyles.
Posted by Brendan Allen at 11:29 p.m. 1 comment:

The Return of Morality

I came across a post on a blog today.

It includes the quote:

Teenage girls shouldn’t be having underage sex. Why? Because it’s wrong.

So who do you think wrote it? A priest, an Evangelical Minister, a rabbi, a schoolteacher, or a renowned member of the Catholic blogosphere?

No. Believe it or not, it is the work of Tom Harris, Member of Parliament (Glasgow), who is a member of the British Labour Party - ironically the political party which can claim a lot of the blame for the society and problems which he writes about.

The piece of well worth reading and is here.
Posted by Brendan Allen at 11:09 p.m. 1 comment:

Email ThisBlogThis!Share to TwitterShare to FacebookShare to Pinterest
Labels: Media

Today, February 6th, is the feast day of St Paul Miki and Companions, also known as the Twenty-Six Martyrs of Japan. They were executed for the faith in 1597 in Nagasaki.

I visited Nagasaki last year, and I am happy to upload these pictures which I took of the memorial at the site. It is actually right in the city centre of modern Nagasaki.

What I feel is quite significant is the fact that they were canonised in 1862, when, to all intents and purposes, it was still illegal for a Japanese person to be a Catholic. 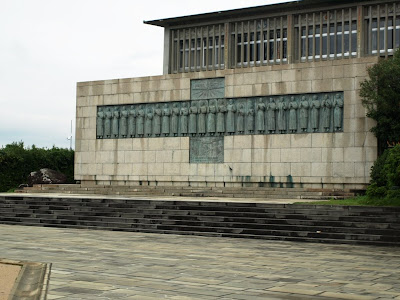 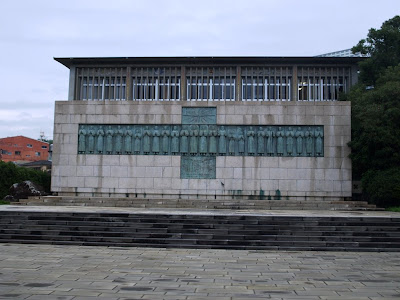 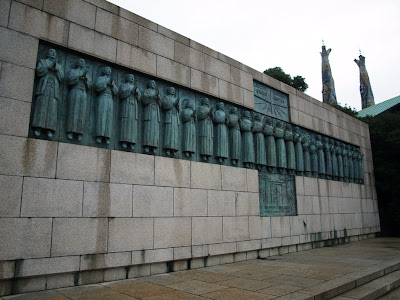 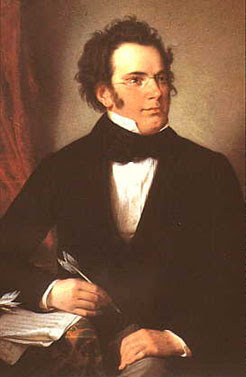 I was privileged to visit Vienna a few years ago, and I have visited his grave in the Zentralfriedhof. He is buried next to Beethoven.

Considering his short life, the amount of work he produced is simply huge.

I had difficulty making up my mind what masterpieces to put up here; probably my favourite pieces of his are the Unfinished Symphony (the 8th), and his 5th Symphony.

So first of all, here is Pavarotti singing Schubert's "Ave Maria".


And here is one of my favourite singers, Dietrich Fischer-Dieskau, with Alfred Brendel at the piano. This is "Gute Nacht" from Die Winterreise, a cycle of poems by Wilhelm Muller set to music by Schubert. This is nice to listen to with a nice hot cup of something in your hand.

Why does this not surprise me?

Over the weekend, some of the coverage of the Williamsongate business with the Pope and the SSPX just made me groan and throw my eyes up to the heavens.

Then earlier today I looked online at the UK Press Gazette, and read this:

Less than a fifth of British people say they trust newspapers, down from about 30 per cent last year and well below the global average, according to a new report published today.